I was sitting down to sort today's mail and there, wedged between one of my wife's textile magazines and the new issue of The Cricketer was a familiar face. I found myself staring at the young woman on the cover of the new issue of The American Poetry Review and thinking, I know her. And indeed, I do, and so will man of you. Alica Jo Rabins, fiddler, band-leader, Torah teacher and published poet (and how!) is smiling out at readers from the cover of the July/August issue of APR, which opens with a selection of eight new poems of hers. The poems are not up on the APR website (ah, the privileges of subscribing), but you can check out the previous issue there. 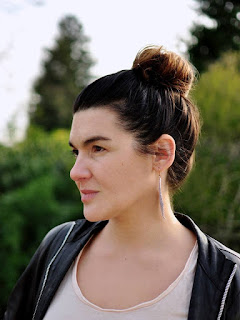 I'm assuming from her Twitter feed @ohaliciajo that she is still performing with Girls in Trouble.She's now living in Portland, and recently won the 2015 APR/Honickman First Book Prize for her forthcoming collection Divinity School. Mazal tov! Not to be too demanding, but when can we expect to hear a poetry reading and a new CD from the band?


Posted by GEORGE ROBINSON at 5:52 PM